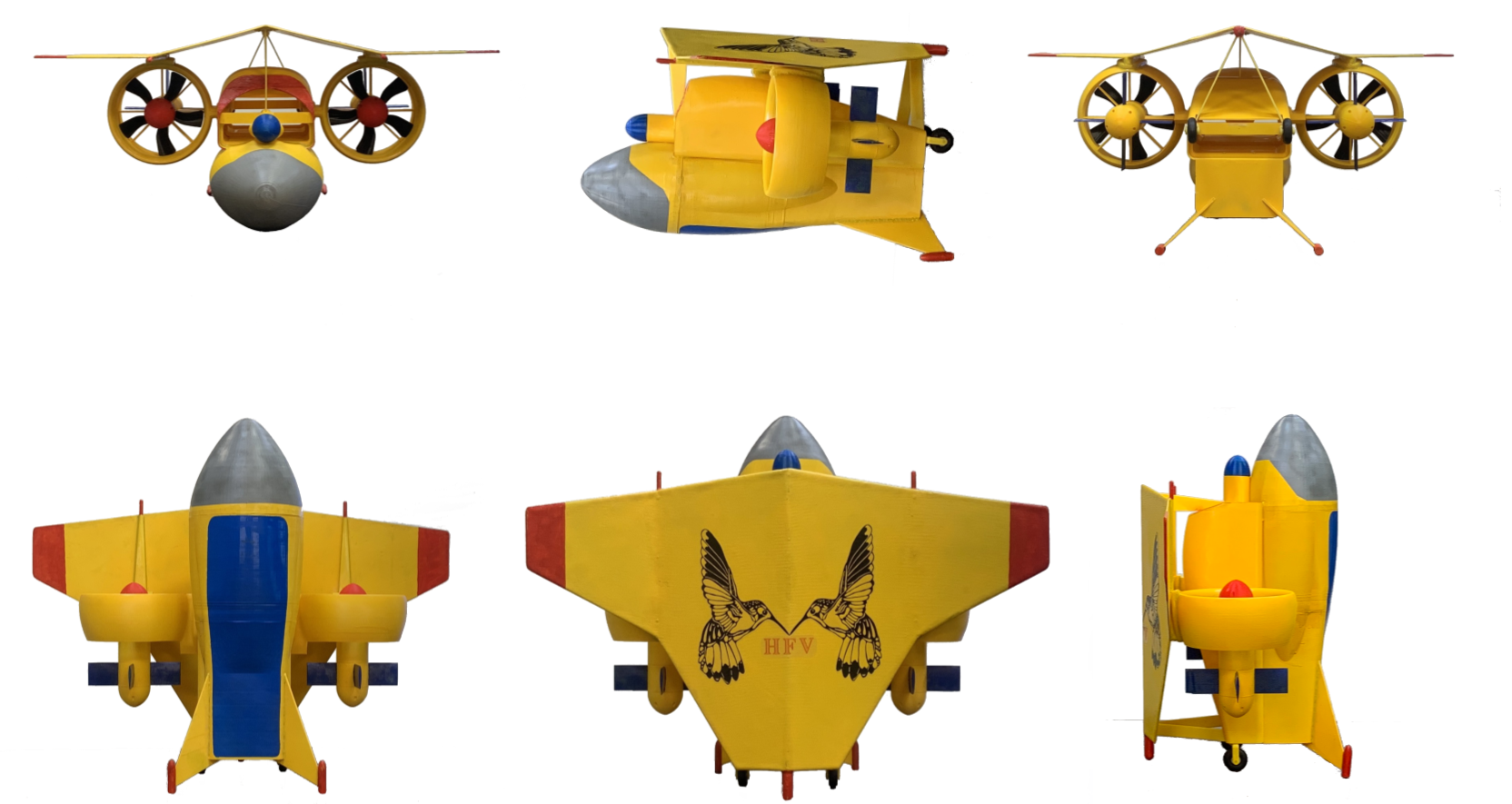 The Hummingbird Flying Vehicle (HFV) is an innovative aircraft concept with vertical takeoff and landing (VTOL) capability and a state of transition into a Level High-speed Flight mode. The Hummingbird can be lifted off without the aid of a runway. After the transition, it can fly at a high speed in a horizontal attitude, and can fly at a high speed with low fuel consumption to amplify the range. And because of the fuel engine, the payload capacity, endurance and handling flexibility are higher than those of the same size or the same weight class.

The development of the Hummingbird aircraft is mainly based on high payload, long endurance and self-maneuvering. The use of reinforced carbon fiber composites (CFRP) to manufacture fuselage and wings, interlocking fan tube thrusters to generate thrust, computer autonomous health management and flight control, advanced sensing and automatic driving, and related power and precision mechanical system assemblies It is suitable for take-off and landing and flight in any place, sustainable remote control and long-time, wide-range horizontal high-speed cruising flight.

The hummingbird drone has the characteristics of horizontal high-speed flight, long range and long payload, and has wider application value than existing drones, especially logistics transportation, fire rescue, forest patrol, sea defense investigation, sea search and rescue, medical treatment. Transportation, communication relay, ship-borne take-off and other missions, but HB-U's greater payload capacity can do its best, so the company is confident that HB-U can be quickly introduced into the domestic and international markets, leading the trend Enable the company to quickly profit and stabilize the financial base.

The company applied for a number of invention patents in China, China and the United States with the design concept of Hummingbird Aircraft (HFV). The new Hummingbird UAV (HB-U) first challenged the drone market and then advanced to the Hummingbird single machine (HB- C1) Leading Taiwan's related industries to manufacture components and establish a complete supply chain for independent production, which not only improves the level of domestic production technology, but also becomes a production base for small-scale flying vehicles that supply the world.

uniqueness
01 02 03 04
In recent years, multi-rotor drones have become the products of crazy consumption around the world. Although this type of vehicle has many advantages, it hides a key problem that Payload and Endurance cannot break through the bottleneck, and the practical application is stretched everywhere. At present, the multi-rotor powered by LiPo battery has a maximum payload of about 10 kg and a flight time of less than 30 minutes. The design may increase the number of batteries or the number of axes (six-axis, eight). Axis), weight and flight quickly produce a saturation effect and cannot grow linearly. In addition, the rotorcraft must rely entirely on rotational power to obtain the lift of the flight. Compared to the fixed-wing aircraft, the rotorcraft will consume more energy to maintain the flight, and the efficiency of the power source into flight performance is low.
SWOT
Strength
01
The Hummingbird UAV can enter the horizontal flight mode in the vertical take-off and landing mode. It is suitable for special applications with high payload and long battery life. It has high security, light and flexible body, easy operation, sufficient power and independent system management.
02
With innovative flight design, small aero engine, special power matching design, fan tube thruster and special wing design and a number of invention patents, it can lead to new application opportunities.
03
Compared with similar products, it has smaller size and low flight risk, and can be developed into long-range remote control drones with different types of applications to challenge market competition.
04
Customized services can be tailored to customer mission needs.
S
Weakness
01
The unit price is high and it is not possible to compete with small multi-axis machines for small area applications.
02
New technology development, product certification and new technology promotion and promotion, and strive for recognition.
03
Market development begins again. The overall demand needs to be developed and promoted. It is necessary to explore market potential and develop marketing strategies.
W
Opportunity
01
Hummingbird UAV has high payload and long endurance. It can be equipped with special instruments and payloads to perform various aerial surveys and aerial photographs. It is suitable for continental, multi-island, swamp, grassland, wide-area airspace and inaccessible areas. .
02
Can be applied to aviation logistics, medical express delivery, agricultural and forestry investigation, disaster prevention, police reconnaissance, military patrol, air communication relay and other tasks.
03
To provide solutions for the development plan of China's naval shipborne drones.
04
International cooperation between Malaysia, Indonesia, the Philippines and other countries provides high-performance novel drone technical support solutions for remote forest areas or multi-island waters.
O
Threat
01
Manned aircraft with high payload and long battery life can participate in competition, and the initial development is not easy to turn over.
02
Other small drones are under greater pressure before demand development has yet to take shape.
T
Market Analysis
Both NASA and DARPA (The Defense Advanced Research Projects Agency) are developing a new generation of vertical take-off and landing aircraft and drones. The payload capacity and speed range have greatly improved the impression of drones in the past, to hundreds of kilograms of payload and hundreds of At the speed of kilometers, China has also released a series of vertical takeoff and landing drones, but they are still stagnant in small, lightweight, short-range exquisite vehicles. Whether it is GL-10, Eagle Ray or V-22, the price is in the range of aircraft, each worth about NT$ 5-1 billion.

The advertising of the Jetpack, the single-person manned machine is responsive in the market but there is no heat. The market demand and price level can only be estimated from the reaction situation. Take the flight backpack as an example, the price is about 350,000 US dollars, or NT$10 million. Currently, the marketing is targeted at high-consumption leisure groups, mainly in the Arab countries and European and American markets. The price of the future Hummingbird single-seat manned aircraft (HB-C1) is positioned at a price of US$250,000 to US$300,000, or between NT$750 and US$9 million. The three electric systems, the price is in the range of 20 to 250,000 US dollars, about NT$600~7.5 million, can not be used for long-life flight, the positioning has been set as a play equipment, can not be loaded with Jetpack or HB-C1 With characteristics to compete.

However, the HB-C1 has a brand new flying concept. It is breakthrough thinking with payload, endurance, and flying speed, and its performance is higher than all current class aircraft. The small aircrafts in the market, had limited performance and is capable to perform only a limited range of the smaller missions. If a larger remotely controlled helicopter is used as the vehicle, the maximum range is only 40km in a hour almost, and its service capacity is very limited. How to expand the service range to more than 100 kilometers and increase the payload from tens to hundreds of kilograms, the performance of the aircraft becomes very important, and the Hummingbird aircraft has an outstanding performance advantage.

HB-U
1 2 3 4
Safety Facilities
When the automated system detects an engine failure, regardless of whether the aircraft is in helicopter mode or high-speed horizontal flight mode, the system will switch to safe mode to slow down and search for an appropriate location to land. At the same time, the spare motor is activated to drive the fan tube supercharger FTB to achieve the effect of speed reduction, so that the aircraft can safely land.


01 Backup Power Supply and Fan Tube Supercharger (FTB): The backup battery pack provides electrical energy for use by the aircraft's safety devices and provides additional energy for landing. For safety reasons, once the engine fails, the backup battery will start immediately to drive the FTB to reverse operation. The FTB will provide enough lift to slow down the body, and the system will automatically search for a suitable landing site nearby to achieve a safe landing.


02 Parachute: We are developing a parachute that can be launched in 0.6 seconds and has a safe height of less than five meters and a load of 1,100 pounds. If the FTB is turned on but fails to slow down the aircraft to the recommended safe speed, the parachute system will immediately Open to make the aircraft land safely.